The New Multiannual Financial Framework will introduce the European Solidarity Fund Plus and provide funding for recovery efforts.

The Multiannual Financial Framework 2021-2027 is the European Union’s long-term budget. Its design will have implications on all levels of EU policy making, ranging from the Member States contributions to the creation of various funds for research, the promotion of social rights and others. Given the complexity of the MFF, this briefing highlights some of the main features of the MFF, the state of the negotiations and CECOPs view.

The grand politics of MFF

One of the key debates between the member states and with the highest conflict are on the contribution that each member state must pay to the EU’s budget. Especially in the light of Brexit, this is not an easy negotiation. Furthermore, the negotiations of the MFF are conducted via the assent procedure, in which the European Council (Representation of Member States) is at the centre of the process, with the European Parliament only having the option to accept or reject. Therefore, advocacy on the MFF is best conducted on a national level.

Whereas these negotiations are not of direct concern for CECOP, they might lead to delays in the overall allocation of the budget, creating potential gaps between programmes being terminated at the end of 2020 and the implementation of upcoming programmes in the new budget. The Social Platform, a network to which CECOP is affiliated called on President von der Leyen to ensure contingency funding in case such a gap arises. On 27 March 2020, the Commission proposed a regulation to prolong existing funds (ESF, YEI, ESIP etc) for two years to avoid such a funding gap.

Upcoming changes in the new MFF

The Commission proposed several new programmes within the new MFF that are of interest for CECOP and its member organizations. Most notably, the introduction of the European Social Fund Plus will merge four existing programmes (European Social Fund, Youth Employment Initiative, Employment and Social Innovation Programme, and the Fund for Aid to the Most Deprived) and is the main instrument to implement the European Pillar on Social Rights. The main policy objectives of the ESF+ focus on employment, education and training, as well as social inclusion and contains several specific objectives to make these efforts operable (see graphic below). 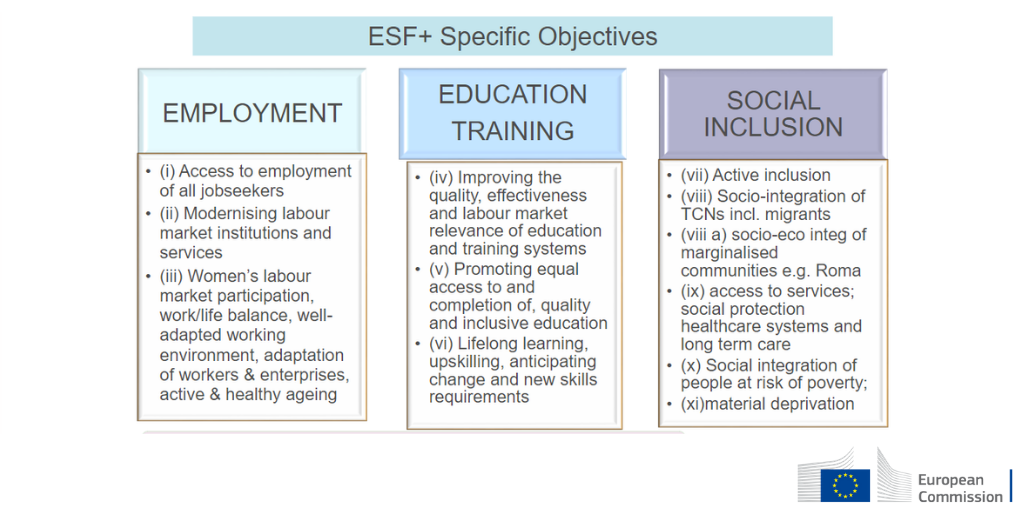 Based on information obtained on 27 May 2020, the European Union Health Programme will be maintained as a separate programme. The initial proposal of the Commission from 2018 had foreseen a budget of €101.2 billion to the ESF+. However, the initial budget was reduced by €3.5 billion, which leads to an overall budget cut of the ESF+ compared to the aggregate budgets of the four programmes that ESF+ replaces.

The regulation of the ESF+ follows the ordinary legislative procedure and allows the European Parliament to amend the regulation. In December 2019, Trialogue negotiations between the Commission, the Council and the Parliament have started, but it was decided to continue negotiations on a technical level from there on. The Social Platform responded to a consultation process of the Commission in 2019, pointing out the limited involvement of civil society organizations in the last ESF programme. Furthermore, it was demanded that the ‘Social Scoreboard’ as a success metric is enhanced in future programmes. The Social Scoreboard has been established as a success indicator for the European Pillar of Social Rights, and is based on the three dimensions of ‘equal opportunities and access to the labour market’, ‘dynamic labour markets and fair working conditions’, and ‘public support / social protection and inclusion’.

Facing the COVID-19 crisis, the European Parliament called for a €2 trillion ‘Recovery and Transition Fund’ to be added to the next MFF. Whereas this demand is still at a very early stage of the policy process, the Social Platform published an open letter to President van der Leyen, calling that existing funds for vulnerable parts of society shall not be diverted to health and corona related burdens, but new funds need to be granted in order to tackle the COVID-19 crisis and rebuild Europe’s economies.