The ‘Stand up for the Social Pillar’ Alliance held a high-level debate following the publication of the European Commission’s Social Pillar Action Plan with the participation of Commissioner Schmit and the Portuguese Minister of Labour, Solidarity and Social Security, Ana Mendes Godinho. CECOP President Giuseppe Guerini reiterated the important role worker and social cooperatives take in the implementation of social rights in Europe.

CECOP, along with its Alliance partners ETUC, Social Economy Europe, the Social Platform, and European Movement International formed the ‘Stand up for the Social Pillar’ Alliance, calling for a meaningful implementation of the European Pillar of Social Rights. With the European Pillar of Social Rights being ratified by the EU institutions in Gothenburg in 2017, the action plan provides a roadmap how to achieve the aims of the Pillar.

On March 4th the European Commission published its Action Plan to implement the European Pillar of Social Rights. A day later, after a first reading of the action plan, the Alliance held a debate with key stakeholders to discuss the action plan and the steps that will follow.

President Giuseppe Guerini welcomed the action plan and highlighted the important role that this initiative takes to ensure that the green and digital transitions ongoing are just and benefit everyone.

‘Worker and social cooperatives put the human at the centre of their businesses, which allows for work that is inclusive and in dignity. This is the great potential of cooperatives in delivering the objectives laid out in the Social Pillar’, Mr Guerini said.

During her intervention, Portuguese Minster of Labour, Solidarity and Social Security Ana Mendes Godinho stated that this action plan is an important tool to fight worsening trends in poverty and unemployment that the current pandemic exposed. Portugal currently holds the EU Presidency and is planning a Social Summit in Porto in May 2021.

EU Commissioner for Jobs and Social Rights Nicolas Schmit, who was leading in the creation of the Action Plan, highlighted the big steps forward that the EU took over the last decade. Even though the plan could be more ambitious, he argued, it is a large step forward from previous austerity policy.

CECOP and the Alliance is thankful for the valuable contributions of the participants of the debate and looks forward to making the promises of the action plan a reality. 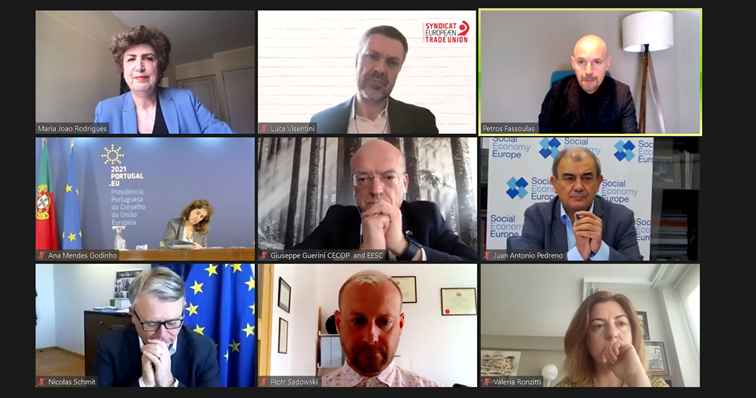