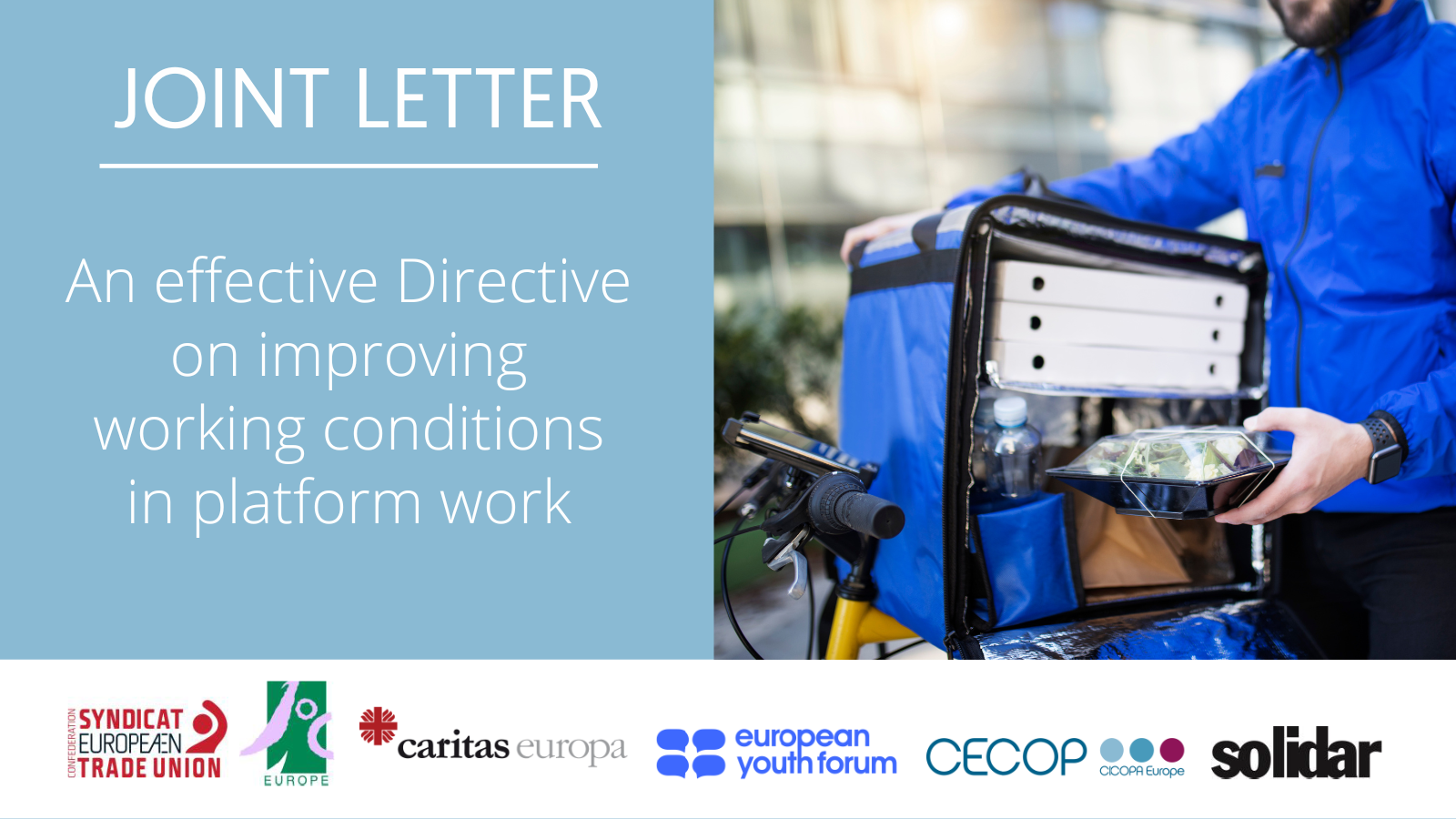 CECOP, alongside with the European Trade Union Confederation, European Youth Forum, JOC Europe, and Solidar, has co-signed an open letter to the European institutions, calling on them to adopt an effective Directive on improving working conditions in platform work. Please find the full text of the letter below.

This letter is a joint plea of trade unions, cooperative enterprises, and non-governmental organisations to the European institutions for an effective Directive on improving working conditions in platform work.

We do not oppose  digitalisation but believe that it should always provide social improvements, respect working conditions, and be developed in cooperation with workers and trade unions.

Whereas some digital labour platforms operate with genuine self-employed workers, many digital labour platforms nevertheless exert the prerogatives of employers (by relying on rating systems and performing algorithm management, among other forms of applying control) and still present themselves as digital marketplaces which only facilitate the offer and demand between an undertaking and a client. This  group of digital labour platforms have based their business model on creating  a race to bottom on rights through enhancing competition among workers, putting  the risks of the activity on their shoulders, and operating in a legislative vacuum to maximise the benefits.

Competitiveness should not come from downward pressure on labour rights. A business is only sustainable if labour rights are respected. Rules are needed to ensure that those digital labour platforms which do not operate with genuine self-employed workers do not evade their responsibility through imposing bogus self-employment. This is not only unfair to their workers, but also to the vast majority of businesses that play by the rules, including platform cooperatives.

These malpractices also have a detrimental effect on European society, as they not only erode the working conditions and quality of life of workers but also affect negatively traditional industry and public revenues. Considering that this model is spreading to new sectors, ambitious legislative action is needed to avoid detrimental impacts on the sustainability of the traditional business through unfair competition.

The so-called “platform economy” is not a separate silo of the economy. There is nothing structurally novel about “platform work” that would prevent general labour law and the capacity of trade unions and employers to bargain collectively from regulating it. Platform work is, ultimately, work and the economic activity of digital labour platform is, at the end of the day, part of the economy.

The adoption of a regulatory instrument at EU level should be aimed at adopting minimum standards of protection to safeguard workers' rights, and in this respect, there is no difference from  the rest of the world of work .

The platform business model is demonstrably not limited to intermediation of service, but it is inherently linked to the activity sector in which they operate. They should therefore abide to the existing sectoral rules respected by the majority of companies.

On December 9, 2022, the European Commission presented the proposal for a Directive on improving working conditions in platform work. The draft legislation includes, among other provisions, the establishment of a rebuttable presumption of employment relationship for workers in digital platform companies, complemented by a reversal of the burden of proof.

Ahead of the vote in the Employment Committee of the European Parliament, we would like to raise two points of attention that we believe are crucial to improve the proposed Directive.

The Commission has made the activation of the presumption of employment dependent on two out of five criteria of subordination being  met. This requirement will give digital labour platforms the possibility to draft contracts and working conditions in such a way as to escape four criteria on paper and therefore continue with the malpractice of bogus self-employment as well as deliberately limit the freedom of genuine self-employed workers on another criterion. Furthermore, the use of criteria to trigger the presumption ignores the difficulty of enforcing proper classification by platforms. Besides the violations of labour rights, these proposals will again open up the possibility for digital labour platforms to provide for unfair competition against those companies respecting the rules. To prevent this, a true presumption with a reversal of the burden of proof must place the burden on the platform to activate the rebuttal of the presumption and not leave this activation on the shoulders of workers or administrative or judicial authorities.

Open-ended criteria should therefore help rebut the presumption, not activate it. This will grant employees with an employment contract and protect the self-employed from the subordination of platforms, such as it is the case in most of traditional companies.

Likewise, the limitation of the presumption of employment relationship to only those workers bringing their cases to the relevant administrative or judicial body would result in situations in which two or more workers doing the same work for the same digital labour platform would enjoy different employment statutes. This is an attack on  the anti-discrimination acquis in which the European labour legislation is built. Erga Omnes is the only rightful approach.

Like any other worker, those who go through digital work platforms must have access to social protection, as acknowledged in the European Pillar of Social Rights. The proposed directive should prevent digital work platforms from developing their own unilateral private protection schemes, particularly when this is done to escape their responsibility as employers. Such private and non-transferable schemes can create a lock-in effect by providing for social dependence on the digital work platform and therefore produce a dumping with traditional companies. In this respect, the reference in the recitals of the directive to the voluntary decision to pay for “social protection, accident insurance or other forms of insurance, training measures or similar benefits to self-employed persons working through that platform (…) should not be regarded as determining elements indicating the existence of an employment relationship " is very dangerous and allows the creation of a third category of workers, which the Directive itself is against. The law must clearly state the opposite: such behaviour on the part of digital work platforms must be an indication of subordination.

Lastly, the importance of  momentum should not be underestimated. The impact assessment issued by the Commission estimates that proposed measures would only benefit 5.51 million currently misclassified platform workers out of the total 28.3 million at EU level. We have reservations about  the methodology used by this study and it is highly probable that the number of bogus self-employed workers in digital labour platforms exceeds extensively the estimate of 5.51 million. Given that  the Commission estimates that the number of platform workers will grow to 42.7 million in the EU-27 by 2030, we urgently need an ambitious and future-proof Directive to protect this rising group.

Hoping that you share our ambition for an economy that works for people and supports European companies, we urge you to take the steps that will make the current proposal stronger.